Manetto Hill Jewish Center of Plainview recently celebrated a grand occasion—the installment of its new Rabbi, one who hopes to usher his new congregation into a new age of hope, community and learning.

Rabbi Neil Schuman, or “Rabbi Neil” as he likes to be called, comes to Plainview from Rutherford, NJ. A man full of youthful charm and energy, he places great importance on education, and to that end holds a Bachelor of Arts in Talmudic Law and a Master’s degree in Jewish Education. While Schuman has worked in numerous synagogues throughout his career, Manetto Hill’s Conservative Jewish community represents a welcome departure for him, granting him the ability to bring the components of his faith into an enlightened modern age.

“I was an Orthodox Rabbi, and I wanted to become a Conservative Rabbi because I wanted to introduce a little more innovation and have the freedom to introduce meditations or commentary to the services,” he said. “I felt that sometimes people were not attracted to the Orthodox synagogue for several reasons, such as the fact that people couldn’t sit next to their spouses, and I felt the need for a change.”

Now that he is situated in Plainview, Schuman said that he couldn’t be happier with his new congregation—consisting of about 200 families—and intends to stay steadfast as their Rabbi for many years to come.

“I like the Manetto Hill congregation…they’re very friendly, and they’re like an extended family,” he said. “The people here like learning, and I like teaching. I teach at the Day School, and I get the chance to work with Bar Mitzvah and Bat Mitzvah students, so it’s something that I really enjoy. It’s a very vibrant and growing congregation for people of all different ages and I really like it.”

At their temple on Jan. 11, an emotional ceremony was held to officially install Schuman to his new position as spiritual leader of the Manetto Hill congregation. At the event, held in front of a packed room of synagogue members, local dignitaries and politicians, Installation Planning Committee member Jodi Hirsch said that “Rabbi Neil” has already won over his new community.

“The Manetto Hill Jewish Center family is excited to welcome Rabbi Neil formally in his new role,” she said. “He leads our community with excellence, compassion and vision, capturing our hearts. He’s teaching us and helping us become better people and better Jews.”

U.S. Congressman Steve Israel was a guest speaker at the Schuman Installation ceremony, and, in welcoming the Rabbi to his new post, relayed a heartfelt story from his own family past that illustrated the richness and strength of his own Jewish heritage.

“You can tell the most about a person from what they hang on their walls, and in my office in Washington, D.C., I have the original immigration certificates and pictures of my grandparents…they’re closest to my desk because they’re closest to my heart,” he said. “They came from Russia, where they were persecuted for being Jewish, and I don’t think they ever thought that when those pictures were taken that one day they would be hanging in an office in our nation’s capital, or that their grandson would be a congressman. So, on behalf of my grandparents, I want to welcome Rabbi Neil to this synagogue and this community and thank him for his leadership of the Jewish people.”

The ceremony lasted about an hour, and was rife with Jewish tradition, lore, prayer and above all else, hope. Afterwards, the congregation enjoyed a brunch together after the new Rabbi’s father and son performed the Motzi, or symbolic cutting of the bread typically done before eating.

Shirley Kurtzman, a founding member of the Manetto Hill Synagogue, said that Schuman was clearly the right choice for the job of Rabbi.

“I thought the ceremony was very lovely, and Rabbi Neil is a warm person,” she said. “All I could think of is that he had picked up on the need and the feelings of our members towards each other, which is interesting that he recognized that. I think he will be a wonderful Rabbi for Manetto Hill.”

Harvey Cohen, who said that the congregation refers to itself as “the little synagogue that does,” appeared quite excited at the prospects Schuman’s leadership is sure to provide the Manetto Hill community.

“We love the new Rabbi. I think that he’s going to lead us into a whole new world of learning and commitment to Judaism,” he said. “The installment ceremony was beautiful, and we wish him many years of success and that he’ll be our Rabbi for many years to come.” 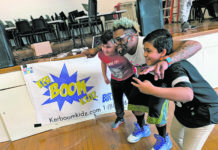 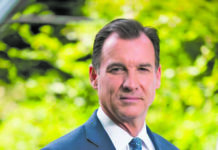 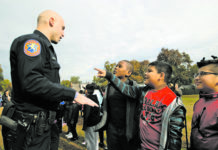