World War II—among one of the most pivotal eras in world history—was brought to gritty life in Old Bethpage recently, more than 70 years after the Normandy landings on D-Day.

The Museum of American Armor, located on the grounds of Old Bethpage Village Restoration, held its fourth annual WWII Encampment event and scores of people got to experience an authentic slice of 1940s military life like never before, according to vice president of the museum Gary Lewi. 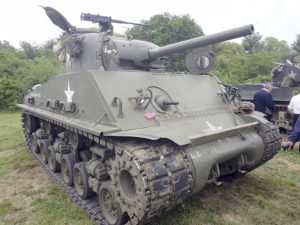 “Over the last four years, this event has been building in part of the reflection of the growing strength of the museum and its presence here at the park,” he said. “This is more than a museum. It is an educational center and we’re trying to connect with multiple generations of people who may not understand the seminal event of WWII and the fact that their current world is defined by events that took place 75 years ago. It’s not some distant, esoteric, historical footnote. It’s in everyone’s DNA and that’s one of the reasons why we have the number of people we have here today.”

A testament to the men, women, machines and equipment of WWII, the Museum of American Armor is home to more than 30 armored vehicles, including tanks, cannons, half-tracks and more, all painstakingly restored and maintained to give visitors a real glimpse into the largest war the Earth has ever seen—and the bravery of those who fought in it.

Held in the large field across from the restoration’s Manetto Hill Church, the WWII Encampment saw much of the museum’s wares out and rolling about for attendees to marvel at, such as the mighty Sherman Tank and an M48 Cold War-era tank. Unfortunately, according to Lewi, a recently-acquired M18 Hellcat tank destroyer was unable to participate that day as it was still being renovated.

However, Lewi was quick to point out that the event wasn’t just about the flashy hardware—it was about conveying the whole picture of WWII to the public.

“In terms of presentation, this is the largest WWII Encampment weekend we’ve ever had and it continues to grow in part because our collection continues to be augmented. But not everyone was in Patton’s tank,” he said. “Here today, we also have a working field kitchen, a medical tent and a big selection of American artillery pieces, which played a huge factor in securing American victories. So, we have things that are appealing to kids who are five-years-old just to engage them, but they’ll also get to experience the real day-to-day life of our soldiers from the era as well.”

Between the living historians and the docents for the museum, the WWII Encampment boasted about 75 volunteers that day and no sooner than when the event ends is when planning and preparation for next year’s will begin, Lewi said.

One of the unique attractions at the encampment didn’t focus on the American military. Standing in a tent surrounded by pictures of Joseph Stalin while period Soviet news broadcasts played over the air, Dave Goliger of Baldwin was decked out in his authentic Russian Army uniform and sported a long beard, looking as if he had just stepped from deadly combat in the wilds of Siberia.

“I enjoy collecting Russian military memorabilia because it’s different. Most of my display is Russian World War II era, including medals, uniforms, newspapers, you name it,” he said. “Most of it is original, with some reproductions and a lot of it is hard to come by—especially the metals—because [Russian President Vladimir] Putin stopped them from coming out of Russia because medals such as the Order of Glory and Hero of the Soviet Union are gold-plated and people were actually digging up military corpses to steal them. Putin passed a law to stop this, which makes these metals very rare.”

It has been said that an army marches on its stomach. No one at the WWII Encampment that day could have agreed with that saying more than Joe Napoli of Brooklyn.

Napoli, a volunteer at the American Armor Museum for the past three years, was heading up the event’s field kitchen that day and was hard at work with his fellow cooks whipping up a period-specific meal for his fellow soldiers.

“This is our presentation of a World War II mess tent. Everything here is dated from 1944 or earlier, including our stove,” he said. “Everything here is all period, right down to the coffee. When we brew coffee, it’s just coffee grinds wrapped in cheesecloth soaking in hot water—that’s a real cup of World War II coffee. Today we’re working on lunch for the troops and they’re going to be having a meal of franks and beans with bread. The interesting thing about being a cook in World War II was that the United States Army was very strict about waste and the chef had a budget of $1.50 a man per day when it came to feeding the troops, so nothing went to waste at all.” 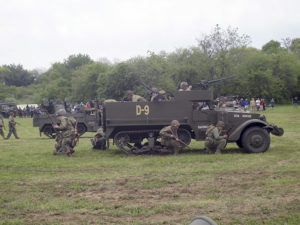 Lewi is hoping that the work the Museum of American Armor is doing through events such as this will help educate children on the importance of keeping the past alive and learning the lessons it has to teach, lest they be lost forever.

“We’re continuing to reinvent ourselves and introduce different components and the museum continues to be an asset to Nassau County,” he said. “One of the things that we are advocating for is an increase in the World War II curriculum in the classrooms. If it’s taught at all, World War II gets covered for only 90 minutes out of an entire school year. It’s a reflection of what’s going on in the classroom. History is being minimized and that’s a problem.”