Resident to run 90 miles for Alzheimer’s

Avid runner Jay Asparro is hitting the road in a big way this fall, embarking on a 90-mile trek from Montauk to Plainview as a tribute to his grandmother while raising awareness and funds for the Long Island Alzheimer’s Foundation (LIAF).

Joined by family and friends at the foundation in Port Washington recently, Asparro laid the groundwork for his charitable odyssey, the Ann Asparro Run, named for his grandmother, who is living with Alzheimer’s. The run that will take place in sections Nov. 4, 5 and 6, starts at St. Theresa of Lisieux Church in Montauk and ends at his home parish St. Pius X R.C. Church in Plainview.

“I am determined to bring attention to the need for more programs and care for individuals with Alzheimer’s disease,” said Asparro. “I plan on raising over $40,000 to support the Long Island Alzheimer’s Foundation and their mission to provide direct care community programs for individuals and families who are faced with the devastating impacts of Alzheimer’s and related dementias.”

Breaking the run into sections is essential for his physical—and mental—wellbeing, according to Asparro. To start on Nov. 4, Asparro will run 29.4 miles along the south fork of Long Island to the Shinnecock Hills Golf Club. Day two will see Asparro leaving the south fork from Hampton Bays, running near the south shore, and ending 31.2 miles later at Our Lady of the Snow in Blue Point. 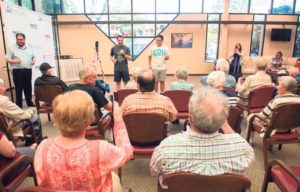 And on the final leg, Asparro will cut up through central Long Island, pacing the final 29.4 miles to St. Pius off Washington Avenue in Plainview.

Asparro’s run isn’t powered by love and support alone, as he is currently involved in a strict training regime.

The longtime runner recently hired a nutritionist who will help craft a fuel plan, while he and his running coach, Alex Arslan of Educated Running, puts together a training plan every week that sees him run dozens of miles every weekend.

“There is some limping afterward, but I also go to physical therapy twice a week and that is helpful,” adding that without his physical therapist, Zachary Spero of One Physical Therapy, he wouldn’t be able to accomplish his 90-mile challenge. “We do a lot of different things, anything to make my legs feel better.”

Beyond physical support, Asparro receives help and support from his wife Allison, daughter Olivia and his 8-month-old newborn son, Shane.

And it isn’t just about preparation in the run-up to the journey—Asparro said knowing that his family will be waiting for him at the finish line adds to the motivation to help sufferers of Alzheimer’s and their caregivers.

“I’m trying to help other people and my family knows that,” said Asparro. “I’m doing it for my grandmother Ann and all of the other families, including the caregivers to let them know that their sacrifices and strength does not go unnoticed.”

To find out how to donate to Asparro’s efforts, visit www.theannasparrorun.com.