As the Rio Olympics ended on Aug. 21, the memories, thrills, pivotal moments and historical impact of Rio 2016 will be immortalized thanks in part to photography and videography equipment from Canon USA Inc. based next door to Plainview in Melville.

As one of the most heavily publicized international events in the world, the Olympic Games require detailed photography to satisfy viewers and fans across the globe. In order to accomplish this feat, the majority of photographers, broadcasters and U.S.-based news agencies in Rio have put their trust in Canon for equipment. In turn, Canon has provided top-quality cameras and lenses and have set up a team of 70 technicians and support staff to give equipment maintenance, repairs, loans and technical support.

“Canon is proud to offer professional photographers and broadcasters high-quality image-making solutions that are thoughtfully designed and versatile to capture detailed images and video,” said Elizabeth Pratt, director of professional client development and support. “Knowing that iconic images will be captured, seen and shared by people around the world really drives Canon to provide not only high-quality equipment but also the customer support needed to ensure they never miss a beat if anything happens to their equipment.”

Canon products were used by various photographers and news agencies in Rio, including, but not limited to, the Associated Press (who used exclusively Canon equipment), Reuters, Getty Images, the European Pressphoto Agency (EPA) and award-winning sports photographer Simon Bruty. Almost 900 DSLR bodies and 1,600 lenses were sent to Rio in total.

In order to support these photographers/broadcasters, Canon Professional Services (CPS) set up a complete repair center to supply equipment, repairs and support personnel to Rio photographers. It is here that Pratt and two other Melville employees were stationed for the Olympics.

“The staff and engineers from CPS help ensure that Canon cameras used by the world’s top sports photographers receive world-class treatment,” said Pratt. “The mission of CPS is to be there for photographers on-site at some of the most media focused events, which also happen to be their most career-defining assignments, to ensure their success.”

The many Canon products used in Rio 2016 were already available to the public, including the EOS-1D X Mark II DSLR, Canon’s top of the line professional camera and the main camera of choice for most Rio photographers. Boasting a 14 frames per second (FPS) frame rate, high resolution, an accurate auto focus system, high durability and weather/dust resistance, the camera has already captured many iconic images in the 2016 Rio Olympics.

Perhaps the most famous image caught on the 1D X Mark II (and one of the most memorable images from the Olympics as a whole) is of Usain Bolt smiling as he finished his 100-meter semifinal race. Cameron Spencer of Getty Images took the photo using a 70-200 mm lens set at 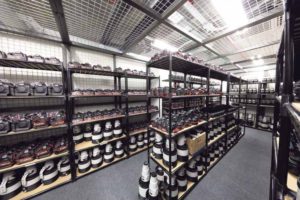 135mm focal length and he used a shutter speed of 1/40th of a second to achieve a blurred effect that highlighted the sprinters’ speed. The photograph has since been hailed on social media and news outlets as a testament to Bolt’s dominance as a sprinter and his cheeky personality as a celebrity-athlete.

In order to capture important photos and videos where positioning a photographer was difficult or impractical (in the swimming events, for example), Canon USA had to develop robotic camera systems to shoot instead.

“We partnered with some of the large photo agencies in advance of the Olympic Games to provide engineering and integration support in the development of the robotic cameras,” said Pratt. “We also developed software to allow multiple robotic cameras to be controlled from a single computer. The robotic camera systems were mounted both in the rafters high above a field of play or in other places where it wasn’t practical for a photographer to stand. The underwater system was used in pools, all fully controlled remotely over a network. The 1D X Mark II and ultra-wide zoom EF 11-24mm f/4L USM lens were selected to be used for Getty Images’ new high-tech, remote-controlled underwater robotic system.”