It’s a chunk of steel—bent and burned, it measures a mere four-feet in length. A seemingly insignificant piece of scrap metal, it hides the historical memory of the day everything changed in this country.

Fifteen years after the devastating effects of the terrorist attacks on September 11, 2001, this holy wreckage salvaged from the World Trade Center will become part of an emotionally expressive work of art at the Plainview-Old Bethpage Library.

The Plainview-Old Bethpage Chamber of Commerce commissioned a prominent artist—well-known sculptor David Haussler of Fort Salonga—to create a breathtaking sculpture featuring steel that the chamber acquired several years ago. This Sept. 11, 15 years to the day of the attacks, this work of art will be unveiled for all to see at its permanent home—the Alma Craib Memorial Garden located next to the library.

Originally, the chamber put word out to the local community for ideas and input on the 9/11 memorial, but chamber board member and past president Francesca Carlow said that when she was first exposed to the work of Haussler, she knew right then and there that he was a man with a unique vision and immediately set out to contact him.

“David was very excited, and he was 100 percent in. He was also very candid with me, as several weeks before I spoke to him he was diagnosed with stage 4 esophageal and liver cancer. He told me he’s determined to see this project through to the very end,” she said. “He’s extremely positive, extremely driven, and while he has his good and bad days, he looks great. And he has a fantastic support group.”

Haussler, an avid surfer, is a creative man who won a full scholarship to an art college in the Midwest. He’s been making outdoor sculptures for more than 30 years and has completed commission pieces for several different libraries, schools, as well as created several 9/11 memorials. And as for his frankness about his current health issues, Haussler said that it’s just an extension of the honesty that being an artist draws out of him.

“What was nice about this project is that it landed on me at the beginnings of being diagnosed with a pretty severe cancer. For some people that would be a private matter, but for me I made it a public matter because I’m educating people and letting them know what I have,” he said. “This way they know what you have and what you’re dealing with, but it doesn’t stop the process of what you’re artistically trying to create—and the creative process on this project was specifically about 9/11.”

Chamber President Elan Wurtzel noted that when his group first started meeting with Haussler, he started sketching right away, producing several different designs. The committee considered all of the designs and selected the one that they felt articulated their vision of what they wanted.

“There are two things to this whole project,” he said. “One is to give tribute to the people who lost their lives on September 11, 2001, and the second thing is to celebrate what makes our country great—freedom, liberty and tolerance. And that’s what this sculpture is intended to capture.”

The sculpture will consist of two steel towers topped off by a see-through stainless steel globe erected around an actual piece of World Trade Center steel. The final piece will feature a granite base embedded in concrete, which will reach four feet into the ground. The globe will be designed to turn when confronted with a light breeze, much like a large wind vane. The sculpture will also feature lighting as well as a Quick Response Code that individuals with smartphones can scan to gain access to an interactive experience detailing the events of September 11, 2001, Carlow said.

“We’re not going to have plaques or anything else around the sculpture, because the sculpture will speak for itself,” she said. “But we are going to have a way to communicate with people who come here, let them know what it’s about, what it represents.”

Library director Gretchen Browne said she was honored to have the library serve as the home for such a touching piece of art that will mean so much to so many people.

“The library continues to represent the community and it’s become an important community hub, so it really is the best place to put the sculpture,” she said. “This is such a beautiful, central location. You can see it from Old Country Road and we get so much traffic, both in cars and on foot. It’s kind of a focal point. So the library is honored to be the site for this wonderful sculpture.” 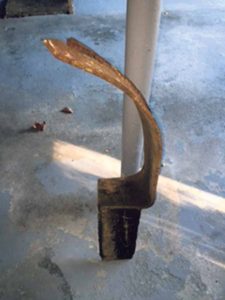 The cost of the sculpture is coming in at approximately $20,000. To help defray the costs the chamber has set up a GoFundMe page. However, Wurtzel said, regardless of how much the community kicks in, the chamber will shoulder any remaining costs.

As for Haussler, the fact that this sculpture—representing one of the darkest periods in American history, yet the strength of unity and the hope for a better tomorrow—could represent his swan song, drives him to see it to its completion.

“This was a satisfying project to work on for sure, because it comes at a time where this could be my last commission ever and I did look at it from that point of view,” he said. “I wanted to put this together, but sometimes because I’m currently going through chemotherapy it hasn’t been easy, so I’ve had tremendous help from Anthony Ingoglia of East Northport and the two of us are actually working together on this project, so it’s a really nice union of two artists working on this wonderful project that I hope touches many people.”