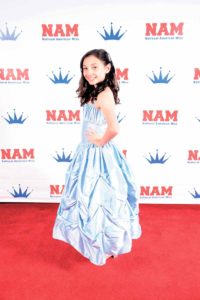 Plainview’s Alexa Mazzamuto recently returned from the National American Miss New York Pageant, where she competed in the preteen division. The 10-year-old presented herself in a formal gown with her father, conducted corporate style interviews in a business suit, wrote and delivered a personal introduction to the judges and the crew in the ballroom and participated in many other optional contests including casual wear modeling.

Through the process, Mazzamuto set goals and achieved milestones, made new friends, gained more self confidence and learned valuable lessons. The Plainview youngster placed in the top five of casual wear modeling and earned a Golden Ticket to Hollywood, which is an official invitation to compete in the National American Miss Pageant this year. She also received a trophy as first-runner up for Miss Personality.