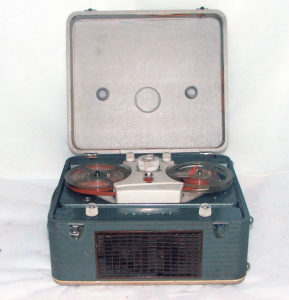 I really love sharing my memories with you via my weekly column. If you read the column with any regularity, I hope you’ve come to see that the folks at Anton Media Group give me broad latitude to “chat” about really any subject that strikes me as interesting. The only proviso that’s ever been attached to my column is the actual length. I have a certain word-count limit per column. In retrospect, the word limit is a good thing, because as my wife Audrey will attest to, I tend to go on and on at times.

Back in the 1950s and 1960s, many homes, most schools and tons of businesses had an old-styled tape recorder. This one-function-only “suitcase” recorder did nothing more than record your voice. It was absurdly “useless” by comparison to today’s technology. Even though you could continually rerecord on the one tape countless times, as I recall, you couldn’t erase the tape once you made an initial recording.

This technological stumbling block was eventually remedied. Early on, you would record yourself “singing” and find that half way through the rendition of a song, a monologue you had previously recorded would break in.

As clumsy as this tape recorder and technology was, for home use it provided may hours of family fun. It proved to be a great distraction during snow storms. Everyone would want to take the microphone and pretend to be their favorite singer or newscaster. My sister always tried to imitate Lucille Ball. I was Ed Sullivan.

When I was only 10 years old, one of the great disappointments of my young life occurred while my family huddled around our tape recorder. The Beatles were at the height of their group popularity and had released one of their most successful albums titled Help. I knew all the songs: “Ticket to Ride,” “We Can Work it Out,” “Day Tripper,” etc. When I say I knew all the songs, I did know the songs and I felt I knew all the words. As you may recall, the lyrics were not that difficult in those days.

On went the tape recorder and yours truly started belting out, “She’s got a ticket to ride, she’s got a ticket to ride and she don’t care, my baby don’t care…” After a few verses, my dad would stop the recording and rewind it to play back. The replay was mortifying. As it turned out, even prepubescent Jack was tone deaf. Who knew? I had been happily belting out Beatles songs from the back seat of the family car for years without anyone informing me of how terrible I sounded.

This must’ve been a problem with the tape recorder. I couldn’t possibly sound like that. There’s definitely something wrong with that machine. I would insist that my dad turn the machine back on so I could prove there was a problem with it. Jerry would turn it back on and I’d start to recite the alphabet. Somehow my regular speaking voice was as foreign sounding as my singing voice. This machine was truly worthless.

I’ve mentioned in this column that I still play quite a bit of basketball. The folks at Life Time Gym in Syosset have a Veterans Over 40 League that I play in. In trying to provide as comprehensive an experience as possible for the league members, the gym employs several young men and woman to actually announce and video the games live. Sitting in announcer style tables at half court during most games, we are filmed and our play commented upon by these really talented millennial.

The games take approximately an hour. Interviews are held with players after each game. The entire video is put on the Internet on a site related to Life Time Gym. I hope you can’t find it.

I am participating in this league for almost two years now. This past week was the first time I’ve ever seen a “live” replay of one of my games. I’ve been an avid basketball player since I was in the fifth grade. During my game this week, the announcers kept referring to a player in red gym shorts and a black T-shirt as “Jack Young.” I do not know who the player was in the red shorts and black T-shirt, but that couldn’t have been me. I know that I know how to play basketball.

To give you an idea of how bad I looked, were I to break out in song on the court. I’d sound like Paul McCartney by comparison to my athletic performance. I am telling you, I swear, there’s something wrong with the video. That can’t possibly be me.