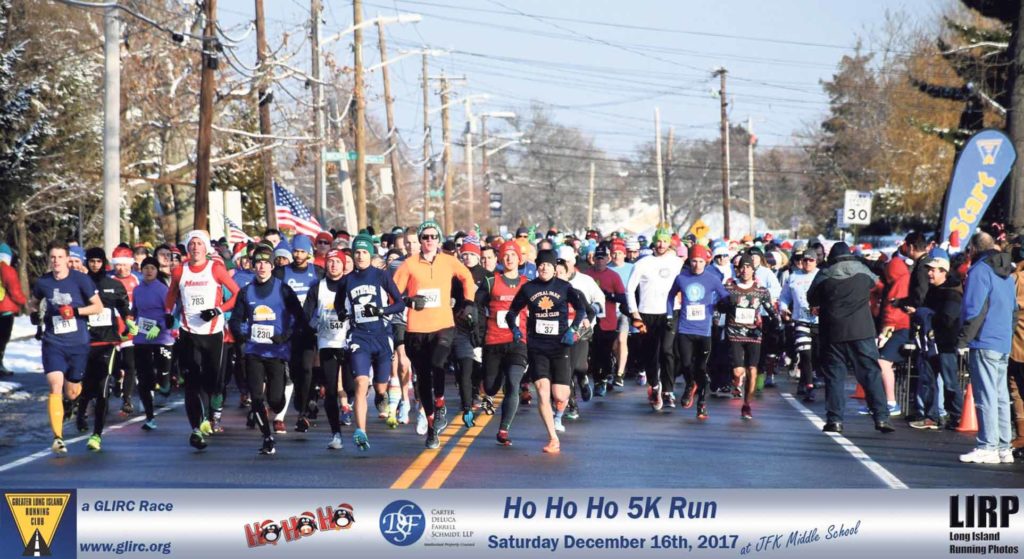 Although the conditions were very much less than perfect, nearly 800 runners and walkers covered the 3.107 miles through the streets of Bethpage.

Congratulations and thanks to race director Ric DiVeglio for another outstanding job of putting all the pieces together; to the Melville Intellectual Property law firm of Carter, DeLuca, Farrell & Schmidt for supporting the event as the Title Sponsor once again; to Local 338 RWDSU/UFCW, Steel Equities and Gold Coast Studios for reenlisting as the Presenting Sponsors. Thanks also to All Round Foods for donating a great array of baked goods for the post-Run festivities, and for the donation of hot chocolate for the runners by Woodbury Country Deli.

The host Greater Long Island Running Club was thrilled to have the running community’s own Nassau County Legislator Rose Marie Walker on hand to help get things started.
The charitable beneficiary of the run was once again the Dominican Sisters, in support of The Opening Word, an education program that enables poor and uneducated Long Island immigrant women the English language and other tools they need to become productive members of American society. In addition, thanks to the generosity of race participants, we were able to turn over hundreds of toys to the John Theissen Foundation for distribution to needy Long Island children.

“We are grateful to everyone who helped close out the 2017 Long Island racing year in style on December 16th,” said DiVeglio. “We look forward to seeing Our Plainview-Old Bethpage stars and everyone else again at our 31st annual holiday excursion through the streets of Bethpage on Dec. 15, 2018.”