Walking a new trail in Oscar Scherer State Park in South Florida brought numerous surprises: the light in a secluded stream, the shape and texture of trees and trailing a resident eagle.

In a man-made pond, a juvenile little blue heron, which in this faze is white, walks in and out of the reeds into the pristine still water of early morning. A tricolored heron, bold looking in gray, wine and yellow stands in contrast. Someone spots a male kingfisher in tall trees surveying the pond for breakfast. Joyce Leary, our extremely knowledgeable and enthusiastic leader, takes us across a secluded bridge ringed by tall trees. In a creek below stands a yellow-crowned night-heron in an ethereal light that makes. Its yellow legs appear orange and its black head and yellow crown with cheek patches which need no highlighting, is hit with that light. The heron jumps to another rock in midstream while the water appears to be a pale tea colored yellow.

On the trail the bark of trees seems to be segmented in tile shapes, some red brown some black. This is a result of periodic controlled burns as are some remaining shortened charred tree trunks. Other trees are tall with bent upward, curved limbs. Little curls in those limbs look as if the limbs were struggling in their reach. Eerie. One tree looks as if it might have been a model for the beginning an old PBS program called Mystery, hosted by Dianna Rigg.

A man from Wisconsin along with his wife, who got here before the park opened, and others, want to see a red-headed woodpecker. At one point it seems as if everyone in the group of more than a dozen gets to see the strikingly colored bird but me. I see an image of it on a woman’s camera. It’s impressive. I get to see a flash of one’s white body as the bird flies. It’s dramatic.

There are three or four red-bellied woodpeckers flying to and from a tree. As we walk their gurgling sound is ever-present. A few times we get to see the rare Florida Scrub jay atop bushes. However, the look is dim as the sky has clouded and there’s intermittent mist. The bird is a light blue gray and dull white. Once I get to see a black head band that goes over the side of the bird’s face forming an eye mask. The bird found only in Florida scrublands turns and jumps finally flying off and joining another that was unseen until now.

Scrub jays aren’t the only jays here. A noisy blue jay on a tall dead tree is contesting a red-headed woodpecker that wants it gone but the jay’s not leaving. The contest goes to a higher branch then around the far side of the tree from which our view is blocked. Some think may have a nest here. I wonder if nuts are stored here by the woodpecker also. Two people have found a brown thrasher perching on a tree branch. It is a rust colored mockingbird sized and shaped bird with a light white breast covered in striations. A sublime scene. The bird’s name derives from the noise that it makes while digging on the ground or crunching large insects to eat. It has more than 1,100 songs, possibly the largest of any North American bird. Variously nicknamed “red mavis” or sandy mocker,” it’s the state bird of Georgia and was the inspiration for the former NHL hockey team the Atlanta Thrashers.

The white head of an adult bald eagle comes into focus. A second ago it had been an indistinct brown form in the recesses of a leafy tree. I involuntarily swallow. There’s the cruelly hook tip of its large yellow beak; its massive stolid face is expressionless as it gazes straight ahead. Soon the bird that Benjamin Franklin didn’t want as the U.S. emblem lifts off the branch, crossing the trail, a lumbering airbus. The eagle lands on a dead tree branch gazing at the flat landscape truly looking the master of all it surveys. Streams of sunlight fall on its body highlighting brown feathers. Lifting off again, the eagle, as do other birds of prey, initially curves downward straightens and flies to a far tree. Joyce says that its presence didn’t help us see any red-headed woodpeckers earlier.

As we walk a woman is photographing raccoon tracks and some fruit plants when we encounter the eagle again in a tree. By now I don’t think much of seeing the bird for the third time. At the walk’s end we get to an enormous eagle’s nest well off the trail where a very large juvenile is standing on the rim vigorously raising and flapping its wings. The bird continues to do so for a long while. It looks as if any day, maybe any minute now, it’ll be airborne. The adult apparently was staying away to give its progeny practice time. During our sightings of the adult, while random, we were actually trailing it towards the nest.

Joyce then tells us an incredulous story. Two years ago, the nest had two adults and two large fledglings. One of the adults become wet and was electrocuted on a nearby power line. If the fledglings had been small and required a lot more food, one adult couldn’t have provided it. However, they needed less and successfully fledged. The following year the surviving adult came back with a mate. a second marriage No one knows whether it was male or female. They had one clutch of eggs that didn’t take but later in the season had another that did. This is now the pair’s second year back and another successful breeding season. A lovely mystery of life along a wildlife trail on the only planet we have. 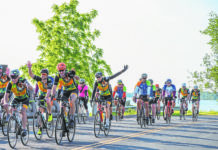