Community and cops come together at fair

Undeterred by the rain, Nassau County law enforcement, elected officials and community members congregated outside the Broadway Commons in Hicksville to celebrate National Night Out on Aug. 7.

The law enforcement-themed fair, organized by county legislator for the 16th district Arnold Drucker, brought together residents and members of Nassau County Police Department’s second precinct for a night of music, food and raffles.

“Not every person gets to meet their law enforcement official, and this is an opportunity to meet them,” Drucker said. “They rely upon the people as their eyes and ears on the ground to help them identify things and bring things to their attention.”

Communities around the country participated in the 35th annual National Night Out. Although similar events have been held in Levittown and Westbury, Drucker said that Tuesday marks the first time in recent history a National Night Out fair was hosted in his district.

“Tonight’s a great night because it gets us in touch with our community people,” said Matthew McCartin, police officer for the second precinct.

Endless Summer, a Beach Boys tribute band, filled the August air with good vibrations from a stage set up in the Broadway Commons parking lot. Just beyond the music, attendees got the opportunity to learn about local businesses and organizations throughout the event, including the Hicksville Boys and Girls Club, Moms Demand Action and the Coder School in Syosset.

A bounce house, free cookies and Batmobile replica also attracted many passing families who had not otherwise known about the event. Lucia Diaz, a resident of Hicksville, was walking by with her son Kevin, 13, when she decided to see what the night was all about.
“I teach my children not be afraid of the police. If they need something, just to come up to them,” Diaz said.

Assemblywoman Christine Pelligrino, who represents the state’s ninth district, said that it’s important to introduce law enforcement to children from an early age and give way to positive a dialogue about the law.

According to Lafazan, the Nassau County Police Department has initiated a number of new strategies to expand community outreach and cooperation.

A number of councils were set up throughout the county to create a channel for communication with local law enforcement in regard to the needs of community stakeholders. 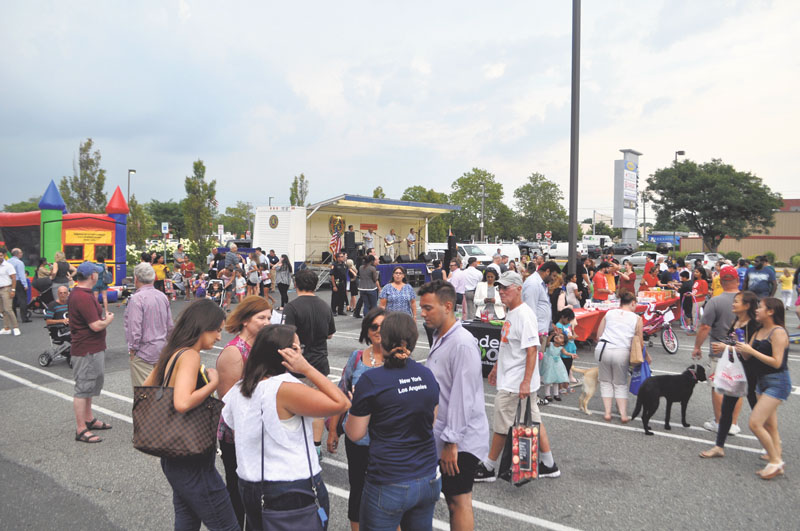 According to Amaka Oweazim, marketing manager for Broadway Commons, the second precinct has a strong presence at the Broadway Commons and are available to shoppers and mall personnel.

“When there’s enough police presence that you can see, people feel safer, people feel more welcome, and that’s what we’re willing to do,” Oweazim said.

Cheryl Brown, who has lived in Hicksville for 63 years, said she feels it is her civic duty to attend events like this one.

“The police are doing a great job,” Brown said. “They’re wonderful men and women and they deserve all the respect and admiration.”