It was a touching ceremony at TOBAY Beach in the Town of Oyster Bay last Thursday night as the town unveiled a new memorial wall honoring the victims of 9/11 related illnesses. The new wall was placed adjacent to the current memorial honoring local 9/11 victims who lost their lives on that tragic day on September, 11 2001. There was a candlelight vigil held as well as vocal performances, music and religious readings from friends and family members. The ceremony took place from 7 to 9 p.m.

“We are proud to honor those families who lost loved ones from cancer and 9/11 related illnesses,” said Town Supervisor Joseph Saladino, who was the keynote speaker at the remembrance ceremony. “We are sad, though, for those who perished because of their heroism and bravery in the weeks and months after the 2001 terror attacks.”

The new wall contains 25 names of people who lost their lives from cancer and other 9/11 related illnesses such as Chronic Obstructive Pulmonary Disorder (COPD) and reactive airway disease syndrome.

“Unfortunately, this is the first group of names to be placed on this wall, but it won’t be the last,” said Saladino. “According to reports from the 9/11 Foundation, there are many more people out there who are suffering adverse health effects from their time spent uncovering bodies and cleaning up at the site of Ground Zero.” 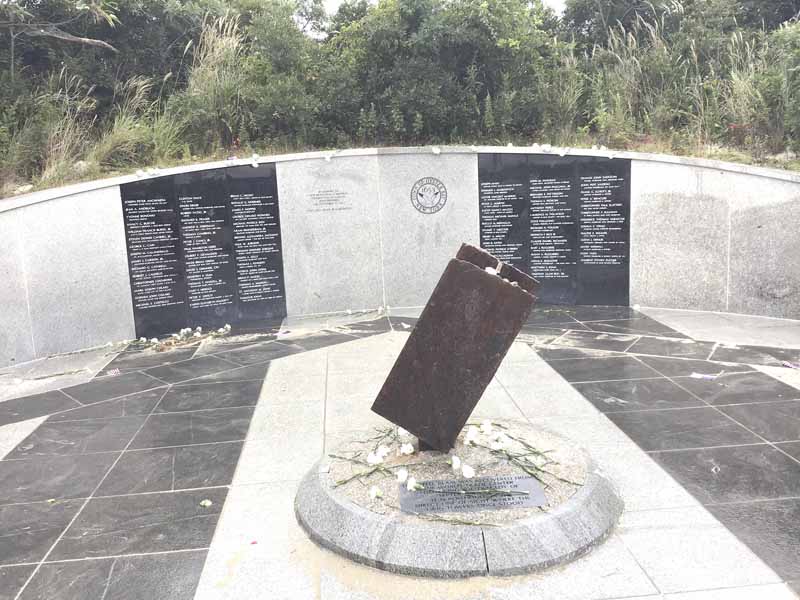 Saladino added that the remembrance ceremony should help bring closure to the loved ones of the emergency first responders who perished as a direct result of their bravery following the weeks and months after 9/11.

State Senator Jim Gaughran, who attended the ceremony, offered words of condolences to the families of the 9/11 victims.

“September 11th, 2001 was one of the darkest days in our nation’s history,” said Senator Gaughran. “This memorial is a fitting tribute to honor the lives and memories of the heroic men and women who rushed to Ground Zero and worked tirelessly in the weeks and months after 9/11 on cleanup and rescue efforts. Each time we come down to visit this beautiful memorial in TOBAY beach and the one up in Oyster Bay, let us honor and remember those who we have lost.”

One of the names included on the wall is Raymond Pfeifer, who died on May 28, 2017, from an illness related to his response the World Trade Center on 9/11. Pfeifer was a former Levittown resident and he was instrumental in helping to get the James Zadroga 9/11 Health and Compensation Act passed in congress.

“This memorial will serve as an important healing monument for the individuals and families who lost a loved one due to a 9/11 related illness,” said Saladino. “It will help to be part of the recovery for the Town of Oyster Bay. We are all one family here and families stick together and are supportive of one another in good times and bad. This memorial will be a pinnacle of support to all the families. Let us respect and preserve the memory of those died because of their incredible heroism and bravery.”