The Drum Corps Associates (DCA) World Championship in Williamsport, PA, brought some of the best Drum Corps from across the country together to compete in multiple categories. However, for the first time in the history of the competition, the DCA gave out the first-ever grand championship prize to one group that inspired all; The FREE Players Drum & Bugle Corps.

“When we started, we were just five members with sticks and pads with the dream of one day marching in a parade,” said Brian Calhoun, a senior music specialist at the Family Residences and Essential Enterprises (FREE) in Old Bethpage. 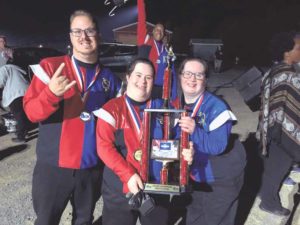 Calhoun started the special needs group in 2010, becoming the first drum corps to consist completely of individuals who are differently-abled in the world. Based in the FREE performing arts program, they are consists of nearly 80 members across five sections: drumline, color guard, brass and front ensemble, in addition to a drum major.

“Over the course of nearly10 years, we’ve traveled across the country and performed at world class events in stadiums and arenas to tens of thousands of spectators, making history at each and every performance,” said Calhoun. “All members have a wide variety of disabilities who receive services through FREE. In recent years, we’ve been able to open ourselves up to all of Long Island and have people audition so we can grow our membership.”

The talented drum corps have gotten plenty of recognition over the years and have established a strong social media following as well. They are nearing 30,000 likes on Facebook, have more than 5,500 followers on Instagram and eclisped 1,200 subscribers on YouTube. And thanks to that social media presence, Calhoun and FREE Director of Day Services Veronica Garcia were able to hold a successful GoFundMe campaign to bring the drum corps to the DCA World Championship, raising more than $24,000.

“It was definitely a very, very large undertaking,” said Calhoun. “It took over a year to plan.”

Labor Day weekend came and the FREE Players were ready. On Friday night, several soloists that were part of the program performed in multiple categories. Among the performers for FREE were color guard soloist Lauren Danis, and snare drum soloists Carly Schoenfeld and Jennifer Pace. The main corp (drum corp and color guard) competed as a group that night as well.

“I feel good about it,” said Danis. “People were cheering for me. It was really exciting for me to meet more color guard friends. I’m obsessed with color guard.”

“It was so very amazing,” said Schoenfeld. “They gave an ovation after I did the solo. I love playing drums and being in the spotlight. I love being able to shine.”

As drum corp captain, Pace feels like she put on a great performance and was proud of her group for doing so well. 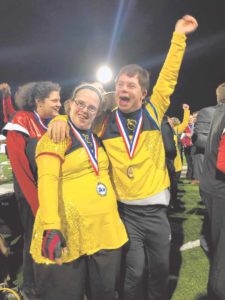 “I feel like when I am performing, people are chanting ‘Jenny, Jenny, Captain, Captain,’” said Pace. “I just kept going. When I look up into the stands, it was mind-blowing. I feel very awarding about it. I love the drum corp because I like bringing everybody in, being open-minded and playing our hearts out.”

“These three ladies and all of our soloist practiced day in and day out,” said Calhoun. “Jenny has a drum set at home that she practices on all the time. Carly practices all-the-time at home. Lauren takes her color guard equipment home every day and practices with it. They are pushing themselves to be the absolute best.”

On Saturday night, the group had their big performance in STA Stadium with all four sections headlining the championship finals. Their set, entitled “Boundless,” included original music created by staff members, as well as public domain music like “When The Saints Go Marching In.” While the event typically has champions for different categories, as they did this year as well, the FREE Players performance won over the crowd and the competition so much so that the DCA named them the grand champions of the event.

“I started this just by myself,” said Calhoun. “To see it all come together after 10 years of tireless work and after years of support from Family Residences, all the families and all the incredibly talented instructional staff that we have as part of our team, it made this moment possible. It was mind-blowing.”

For more information on the FREE Players Drum & Bugle Corps and to donate, visit www.familyres.org/freedrumcorps.