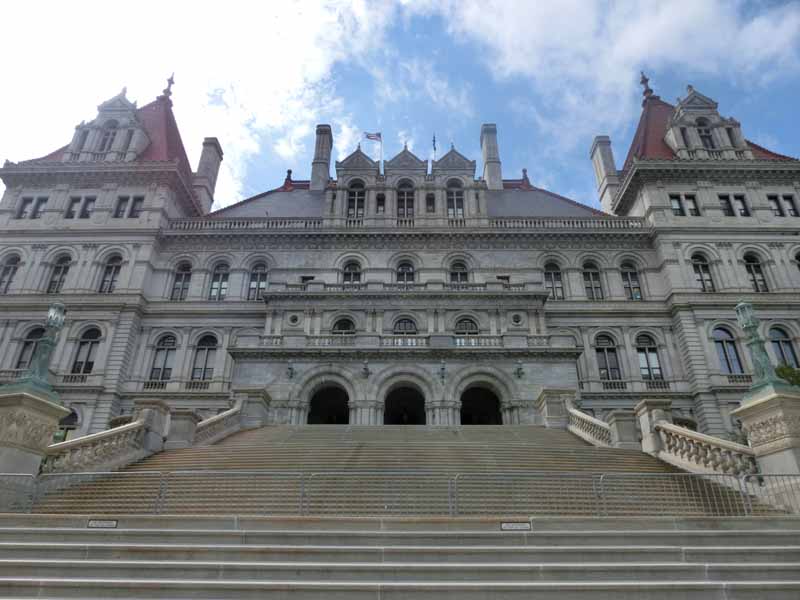 Its the start of a new year, which means the State Senate and Assembly are back in session for the first time in six months. In order to check-in on what is happening in Albany, we sat down with some representatives of the Old Bethpage community to find out what they are working on.

One of the main focuses early on for state officials is the budget proposed by Governor Andrew Cuomo. Assemblyman Michael Montesano said that his priority with the budget is keeping in place programs that help senior citizens and young people. He has listened to the ideas that Cuomo has but is wondering how they can achieve them by monetary means. He specifically focused on the governor’s push for legalized marijuana.

“He’s talking about the legalization generating $300 million in tax revenue,” said Montesano. “I would like to know what he is basing that revenue on. We also know there’s going to be a hefty sales tax he’s going to put on there. We know that retailers are going to have to pay permit fees and licensing fees. But in California, since they have legalized marijuana, the cost on the retailer and the sales tax have been so burdensome, and it has made the price of marijuana so exorbitant, that people are going back to illegal dealers again.”

Another major focus for Montesano is on bail reform. He acknowledges that there needed to be a fix to the current bail laws, but he feels like the execution has been disastrous. He believes that additional discretion for judges must be put back in place.

“They’re letting people walk out with misdemeanors and low-level crimes, but that includes manslaughter,” said Montesano. “That’s a dangerous situation. And some of these people are repeat offenders. They get arrested, they get out and they are repeating that cycle three or four times. Let the judge conduct the hearing at the arraignment of the defendant and consider his past record, the crime they just committed and if they poses a threat to themselves or the public.”

Other aspects of Montesano’s current agenda include getting tax credits for employees who are disabled, establishing an office of the Advocate For People with Disabilities, taking some of the tax burden off of small businesses and creating the Nassau Water Authority to take control of the assets of American Water. Recently, he also successfully advocated for funds to repave Rt. 109, along with State Senator Kevin Thomas, State Senator John Brooks and Assemblyman Michael LiPetri.

The budget is also a major issue for State Senator Kevin Thomas, who said that the focus of the state government is on the $6 billion deficit that’s currently in place for the state.

“That’s been mainly due to Medicaid,” said Thomas. “We need to figure out a way to fix this for the future. My top priority is to ensure that Long Island receives the resources and funding it deserves. I look forward to working with Governor Cuomo and my colleagues in government to devise a budget that delivers on the priorities of the 6th Senate District. From improving educational opportunities to reducing the tax burden on hardworking Long Islanders, I will make sure that Long Island continues to have a strong voice in Albany.”

As the chairman of the Consumer Protection Committee, Thomas is currently working on a data bill entitled the “New York Privacy Act,” which would require companies to allow consumers to obtain the names of all entities with whom their information is shared and give those consumers the power to stop the company from sharing that data if they don’t want it distributed.

“Most professions like doctors, lawyers and bankers get our personal information, they are not allowed to share it, sell it or make money off of it,” said Thomas. “This is why they are called fiduciaries. I want to create data fiduciaries. Having the industry self-regulate is a complete no-no. They always put profit over people and as the chairman of this committee, I have to do something.”

Thomas is also working on legislation that would enact a statewide ban on flavored e-liquid and he has also had discussions about revising the bail reform that has gone into effect, including implementing additional discretion and clarifying the definition of a violent felony is so less people who commit violent crimes are let out. The governor also recently signed into law a bill by Thomas that will bring monitors to Hempstead and Wyandanch School Districts.