Don’t look too far ahead. If you do, you might slip. That’s how things were done throughout the inaugural season for the LIU Sharks women’s hockey team.
And it worked to perfection.

“As I look back on it, when we talked about what our goals were throughout the year, our ultimate goal was the championship,” head coach Rob Morgan said in the midst of his office in LIU’s Pratt Recreation Center. “Every team goes into the season talking about that as the ultimate team goal.” 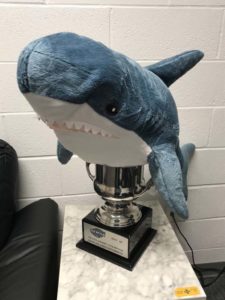 Morgan’s squad, consisting of mostly freshmen student-athletes, didn’t know what to expect when the New England Women’s Hockey Alliance (NEWHA) season began. It took eight games for the Sharks to score their first win. After that, the team dove deep into the ocean.

As the playoffs approached, the Sharks were on their A-game. They sailed into the NEWHA championship battle, facing No. 3-seeded Saint Anselm College in Manchester, NH. In the first two rounds of the playoffs, the Sharks shut out both Saint Michael’s College and the top-seeded Sacred Heart University squad.

“In the championship game, we were playing against a team that played five overtimes the day before,” Morgan said, showing signs of sportsmanship after the Hawks played extra hockey against Franklin Pierce. “We adjusted the time to give them a rest prior to the game for the sake of player safety. We came out feeling really good.

“There was great energy and the first three shifts were really good. Then, it’s like the team had a moment when they realized, ‘Oh my gosh, we’re playing in a championship.’ As a coaching staff, we had to coach them up more on the bench because if they continued to do what they were doing, the puck would end up in the back of our net. We didn’t break out clean, make good zone exits or make smart decisions on the entries.”

The Sharks continued to pluck away at the Hawks’ defense, despite their own struggles on that side of the puck. With Kenzie Harmison in the goalpost, Morgan had faith his team would not give up the fight.

“Every time we made a mistake, Kenzie came up with a big save,” Morgan said. “The one area where we did an exceptional job was defending around our net. There were no second scoring chances. I had this feeling that because Kenzie was so on and you have a goalie that’s in the moment, everything seems to be hitting her and she’s always in the right spot, you just know.”

That’s exactly what happened. Paula Bergström scored the lone goal of the title battle at the 3:54 mark in the second period, following suit from her game-winning goal in the semifinal battle.

“Within the team, we talked throughout the season that we have what it takes to go all the way,” Bergström said. “And the longer the season went and the more we got to play together, I think we believed in it more and more.”

The rest, as they say, is history. LIU defeated Saint Anselm 1-0, capturing the NEWHA championship in the squad’s first season.

“For us to do it in our first year with our founding members is very special,” Morgan said.

Now, Morgan is already putting together the team’s schedule for next year. The grind doesn’t stop, and expectations are even higher for the 2020-21 season.

The championship trophy is not moving away from his office anytime soon. The LIU Shark sits on top of the trophy, scaring away its prey, both on and off the ice.

But the team’s humble beginnings, no matter their success, remain etched in their minds.

“We had a phrase throughout the year,” Morgan said. “We didn’t want to look too far ahead. We didn’t want to focus on what happened to us. We focused on where we were each day and when tomorrow comes, we’ll be prepared for it. We had to get through the first round, and we felt good about it. We went into the second round knowing anything can happen, and that’s when we played our best hockey in the semifinal against Sacred Heart. Then, we woke up the next day and said, ‘Here we are. We’re fighting for a championship.’” 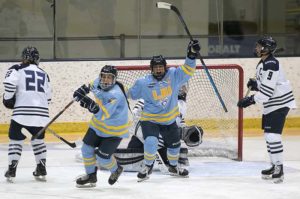 While the team’s early-season struggles were long gone come the halfway point in the season, Morgan knew his team needed a culture. And that’s exactly why he believes the team was so successful.

“We needed to establish our identity and culture,” Morgan said. “That takes time. There’s peaks and valleys. We came out of those valleys a little bit higher each time. You have this group that came together in a short period of time, jumped in to play some of the best teams in the nation and they beat us quite handily.

“Even though we got beat, it was more about how we were playing and who we were playing against. When you see how a defending national champion carries themselves and how they play, we can compare that to how we’re playing. Those are some great lessons that not many teams get to experience at the beginning of the year.”

And the lessons certainly paid off. Now, the Sharks can get started on hunting their prey for next year.

“We had our ups and downs during the season, as all teams do,” Bergström said. “But going in to playoffs we really came together even more as a group to get that title, and that’s what we did.”