During COVID, retired teacher Joel Rauch started writing lyrics for a friend to arrange into songs. What started as an activity to pass time, turned into publishing What Would I Be?, a children’s book about making right choices and learning good morals.

Now, he’s paying it forward into the community with the proceeds of the 500 books sold while teaching kids self-esteem, self-worth and making good choices.

Since releasing the book, Rauch has donated a portion of the proceeds to the Mid Island Y JCC in Plainview. And on Aug. 19, his efforts were recognized by Nassau County.

Rauch was presented a citation from Legislator Arnold Drucker for his work and dedicating a portion of its proceeds toward supporting the Mid Island Y JCC.

“Not only will Joel’s book deliver key resources to the Mid Island Y JCC, I am hopeful that the message contained within its pages will positively impact our community by touching the hearts of young readers,” Legislator Drucker said. “It was a pleasure to have this opportunity to recognize Joel and thank him for his efforts to bring his positive message to the next generation.”

When Rauch found out the news, he was shocked and surprised of his recognition.

The book, released on Feb. 28, is a tale of teaching kids to make good choices, taught through brightly-illustrated animals.

Rauch said he used animals to convey his message because he found that, as a teacher, it was a great combination to use giraffes and pigs to teach lessons rather than adults.

“I was thrilled that it was even published,” Rauch said.

Rauch chose to donate to the Mid Island Y JCC because of the opportunities the facility has given him as a pickleball instructor two days a week.

Teaching the sport became an outlet for Rauch after he retired from his job as a teacher.

For him, “it’s not about the money.” Rather, it’s about paying it forward.

“I feel like I owe the Y for giving me a second chance,” he said.

The book started out as writing lyrics for a friend who was writing an album. As the writing progressed, Rauch’s friend pointed out that his lyrics might work for a book.

Rauch said he’s always wanted to write a children’s book, but “life got in the way” as he said (which also happens to be the name of the album his friend made.)

After encouragement from his wife, Rauch began writing. But he didn’t do it all on his own.

In need of an illustrator, Rauch reached out to a local Facebook group asking for help. Coincidentally, he connected with Bridget Bick, a local illustrator who had a dream of drawing for a children’s book as someone who is legally blind.

“I wear two hearing aids, so we made a great team,” Rauch said, adding that the project gave Bick a boost by fulfilling her dream.

With 500 copies sold and a five-star rating on Amazon, the message is resonating with kids and parents.

Rauch has been invited to read the book at schools in the local area. His daughter, who teaches in Port Washington, read the book to her class. The response was so enthusiastic that he received thank you notes from the students.

Now, he’s working on a new book, What Do You Get?, that pushes children to flex their creative muscles by combining animals and objects. Working with Bick again, Rauch gave an example of a “shipanzee,” a cross between a monkey and a boat. He hopes that parents and children alike will use the book as a bonding opportunity to come up with inventive ideas that spur imagination. 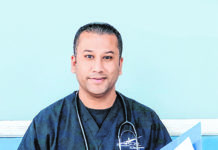